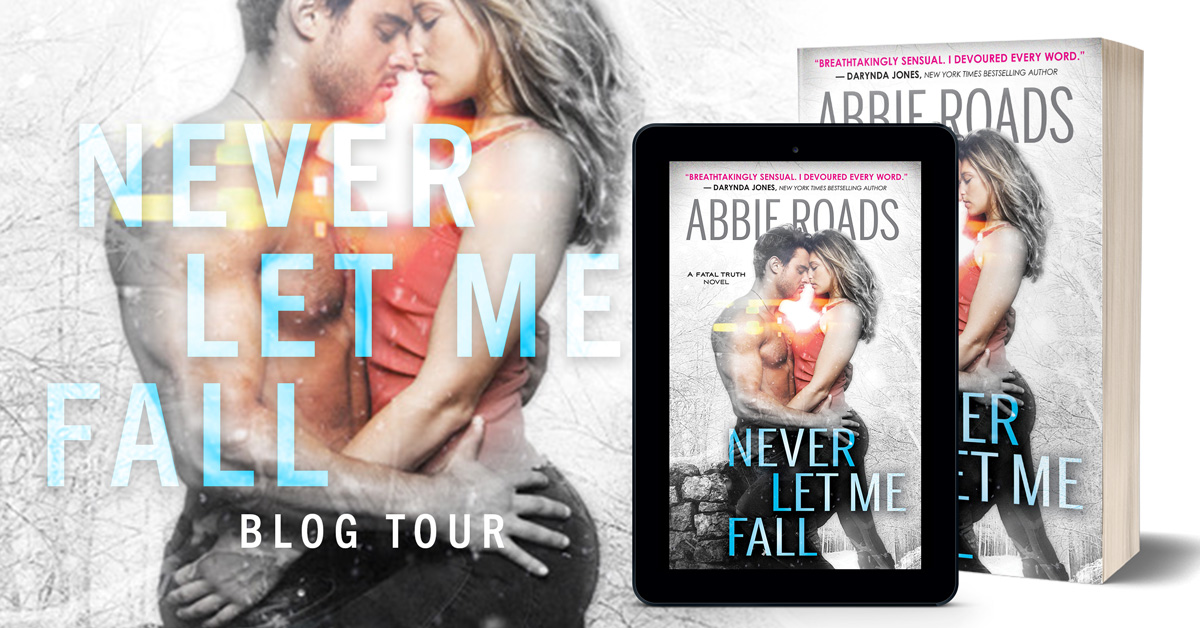 I just finished Abbie’s newest book and as always, she did  not disappoint. Superb storytelling from beginning to end, as she brings two damaged souls together and makes them whole.

The third installment in her Fatal Dreams series, Don’t Let Me Fall is the story of Thomas Brown and Helena Grayse; Thomas can’t see color since a childhood family trauma, and Helena hasn’t spoken in ten years, as it was the only thing she had control over in her world.  Continuing the mythology of Nameless and the Bear, and some of her previous characters make cameo appearances throughout the book.

She dropped her arms from their defensive position. Even though it was dark, starlight reflected off the snow, providing enough illumination for her to see him. His face was ravaged with some emotion she couldn’t name. The scar on his cheek blazed bright, somehow looking painful. There were no words to utter, so she cupped his damaged cheek.

He sucked in a breath as if her touch pained him, but when she tried to withdraw, he grabbed her wrist and held it in place. He wanted her skin on his.

Their eyes met. The impact devastating and healing at the same time. She tumbled into his gaze like a free fall. Enjoying the freedom, fearing the fall. And then he broke the connection and let go of her wrist and grabbed her by the shoulders. “Why did you run from me? I would never hurt you.” Truth twined through each of his words. “I was worried out of my head when you weren’t at the hospital.” He shook her, emphasizing his words. “You know how stupid it was for you leave there without a coat, or gloves, or boots?”

She nodded, couldn’t help it. Her body had been screaming that same message thirty seconds after she’d walked out the hospital doors.

“Why would you do that? You could’ve frozen to death out here.”

Not thinking, she shrugged.

He grabbed her face in his hands. His fingers warm and rough and perfect against her skin.

The world fell away, leaving only him and her. He stared into her. Warming her from the inside out. She no longer felt the coldness of the snow against her backside. All she could feel was him. Inside her. Around her. Over her. He was the air she breathed. The heartbeat in her chest. He was her whole world. And she never wanted this impossible moment to end. She wanted to stay right here. Right now. Forever.

“Don’t you do that.” His tone was deep. His volume soft. “Don’t you ever act as if your life doesn’t matter. It matters.” His thumbs brushed over her cheekbones, sending pleasurable tingling along her nerve endings. “It matters to me.”

Her ears heard his words, but her brain had a hard time translating them.

“Yes, you.” Again, he seemed to be answering the question she didn’t ask. “You matter to me.” He spoke with heartbreaking sincerity. “How could you think otherwise?”

Because I’m Helena Grayse. She slammed her eyes closed.

“Stop that.” The irritation in his tone startled her eyes open. “Stop hiding from me.” His expression was tense, but one thing didn’t change—his kind eyes. “Good God. You’ve got to be freezing to death.” He moved away from her and stood, then grabbed her hands and pulled her to standing. He took off his coat and placed it over her shoulders. The inside warmth soothed her cold skin, and his scent rose up, surrounding her like a hug. He helped her thread her arms through the sleeves and then zipped the coat up under her chin.

The backs of her eyes burned, and she felt the beginning of tears forming. Damn it. She wasn’t going to cry every time he was nice to her. That was just stupid. Stupid. Stupid.

“Come on. Let’s get you back to the house and get you warmed up.” He held out his hand in invitation, giving her the opportunity to decide her fate.

Her feet shackled her in place. She shouldn’t go with him. She should follow her plan and go find a room for the night. She squeezed her hand holding the ziplock bag, just to make sure she hadn’t dropped it. The more time she spent with him, the harder it was gonna be when he found out her real identify. All he had to do was peek at her ID card.

Logic dictated she walk away. Her soul told her to stay.

She reached out to him. He turned her hand over and examined the gash that had been there just yesterday but had since healed. She’d always been a fast healer, but even for her, that was record time.

His gaze flicked up to her eyes and he smiled, an upturning of the lips that contained satisfaction and truth and happiness. The scar on his cheek completed him, making him more breathtaking, in the same way that a flower’s delicate imperfections only made it lovelier.

Together, they trudged through the snow toward the house. Winter didn’t seem quite so cold with him holding her hand. His skin against hers infused her with a heat that traveled up her arm, across her shoulders, and down into her belly, causing warm tingles of arousal to stir.

She glanced at him out of the corner of her eye to see if she affected him the same way he affected her. He didn’t seem fazed by the chill temperatures. Not at all. In fact, he acted as if they were out for a stroll on a pleasant spring evening.

“I’m sorry I wasn’t at the hospital when you woke.” He glanced at her, then back through the woods in the direction they were traveling. “Tonight was my sister’s wedding, and I couldn’t miss it. Evanee’s been through some bad times, and this meant a lot to her.”

They broke through the forest and started across the lawn, following a line of tracks that led to his back door.

“I told her—my sister and her husband—about you. They were excited.” The corner of his mouth tilted upward.

Her mouth went dry, and a stone lodged itself in her throat. Denial looked exactly like this. It looked like a woman and man holding hands while they walked in the snow. It looked like everything was all right on the surface. But underneath…it was all a lie. A lie that had started with him accidentally calling her Helen. A lie she’d perpetuated because she’d never corrected him.

She thought about yanking her hand from his and running, but he would catch her and demand to know the reason. Ugh… How did she go from her plan of getting a hotel room for the night to deciding to go back home with him? She was powerless to resist temptation.

Here are the links, in case you want to read further!!!