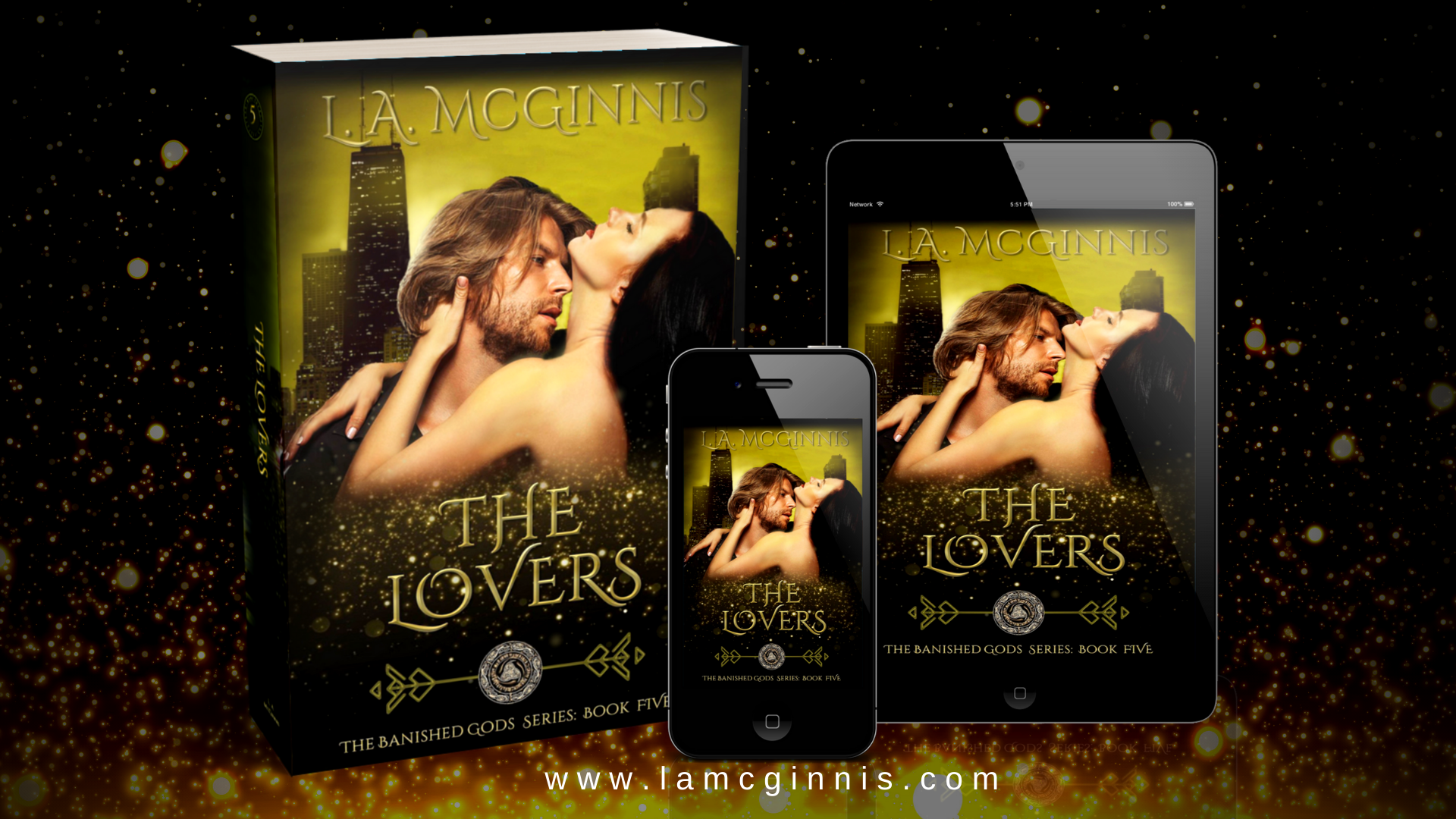 It’s finally here!  I had so much fun writing this book- and today is the day The Lovers finally releases!  I hope you enjoy Freyr and Lilly’s story every bit as much as I loved writing it!  This is book five in the series, and continues the story of the gods, their lovers, and their fight to save humanity.Here is a short snippet that you won’t find in the book:

Doomsday dawned so bright the rays burned their way through the morning as if in a rush to reach the end of the day.

Loki lay with one arm wrapped around Morgane, watching the light play across the ceiling, savoring the feel of her against him, and while the pink brightened to gold, he wondered why after all this time on earth, the Fates had decided to tease him with this last bit of sweetness before taking it all away. Half asleep, Morgane curled herself into Loki, wondering how after all these years of searching, she’d finally found the place she belonged.

Ava tossed and turned in Odin’s Sun King bed, fighting against the pulsing darkness inside of her, its power reaching outwards, as if it knew that today was finally the day.  Sighing, she pulled the covers back over her head and wondered if there would come a time she’d escape its unrelenting demand.

Hunter was on the roof of the Tower, and had been for hours, just to watch the sun rise.  “One last time.”  She whispered, pretending she was high atop her mountains, looking over her beloved green Highlands, instead of the blue-black waters of the lake. When Tyr came up behind her, wrapping her in a blanket, she leaned into him, closing her eyes as he nuzzled her hair. “Not the last, love, never the last.” Tyr whispered, as together they watched the sun melt the mist away.

Fen watched Celine sleep, as pale as snow, smelling of seafoam.  He’d spent the early morning feeling the baby kick against him, as if in a rush to live.  Smoothing her hair back, he slipped from the bed, wanting to give her another hour of rest. Celine wandered in the Dreaming, the mists smoked darkish grey, as if plumes of ash stained them, while all around her the souls of the undead fled, as if there was anywhere they could go.

Sydney stood in a maze of standing stones, so tall only a narrow sliver of light was overhead, and so dense there was no way to pass between them, only an endless, twisting labyrinth of passages, endless and confusing, wrapping around each other, inside and out, looping back and forth, and as she followed them, she seemed to be going ever deeper, instead of finding her way out.

Mir stood at the table in the War Room, arms spread wide as he pored over the map that showed the battlefield formerly known as Chicago.  Today there would be fighting, and today there would be death.  Frustrated, he cleared the table with one swipe of his arm, the map fluttering to the floor, and instead, turned to loading the clips with ammunition for tonight. With every bullet he plugged into the cartridges, he prayed—to whatever gods might be listening—for each of them to find their mark.

Balder opened his eyes and realized he was actually alive, not simply dreaming about being alive, waiting for Hel to torture him some more in the Underworld. Falling back onto the thin mattress, he tried to remember the very last thing he could, and realized it was taking Celine’s hand as she promised him she would bring him back home.

Thor strode down the hallway, looking for any sign of life in this tomb-like obelisk.  When he finally found Mir loading ammo into the guns, which was actually something constructive, he growled approvingly, “Well, let’s get the fuck on with it.”

Freyr gazed into Lilly’s eyes.  They’d been lying like this for hours, but still, he thought he could do this forever.  Lilly traced Freyr’s face until her finger finally stopped in the indentation on his chin.  Perfect.  Somehow this perfect, beautiful creature had ended up with her.  Lilly Domenic.  She stared deep into his eyes, searching for the exact reason why. “Well,” she murmured, cradling his face in her hands,

“Today is finally the day. Let’s make it count.”

You can read THE LOVERS free in KU, or it’s available for purchase for your Kindle!